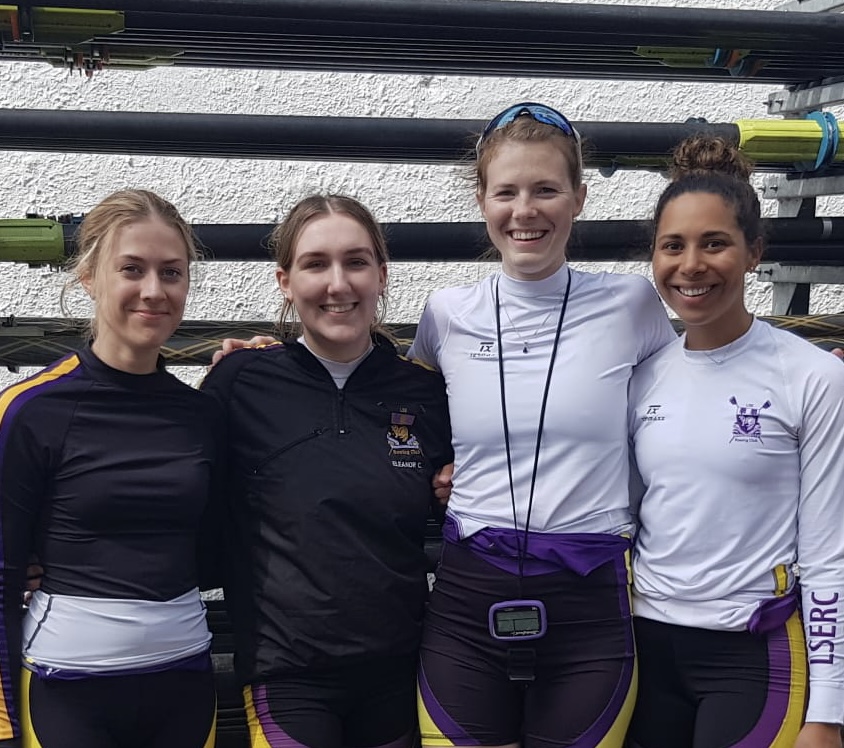 As the spring slowly turns into summer, rowers can rejoice (or fear) the return of regatta season! On the 23rd April, LSERC tackled their first summer regatta of 2022 as the W1 4- (S: Maggie Mlynek, 3: Margo Sanders, 2: Eleanor Cartrlidge, B: Francesca Campbell) took to the Thames yet again. Rowing from our boat club at ULBC up to the starting line at Hammersmith proved treacherous as white-cap waves crashed over the boat and winds managed to snatch away poor Francesca’s visor. At one very memorable point, Francesca screamed as a wave hit the boat and left her almost completely soaked, while our coach shouted from the bank that if we wanted to call it and quit we needed to do so now. Despite her drenched appearance, Francesca’s outlook was positive as she decided we would continue on the rocky path and get to the starting line.

When we (finally) reached the starting line, we had time to quickly sponge water out of the boat while other competitors at the start asked us “why is there so much water in your boat?” – how little did they know… And then we were off for our first race of 1400m against Auriol Kensington (AK)! Navigation was tricky, and we faced a collision midcourse that prevented most of the crew from moving their blades for a few valuable seconds, and so in the end the umpires decided to award the first round in our favour, with AK being disqualified! Quickly we went back to the starting line to prepare for the final. We took alignment against our next competitors, Furnivall, and then we were off. This time, both crews successfully took better lines and an exciting race ensued. After 1400m of tight competition and a fair few adrenaline-fuelled screams from Maggie, the LSE crew crossed the finish line first, 3 boat lengths ahead, and won the W4- category at Hammersmith Regatta. The crew – and our coach, Beth – were ecstatic and we rowed back to ULBC with high spirits through the equally high waves.

It seemed that nothing could dampen our spirits – besides the footwell of water Eleanor received over her head while getting the boat out of the water. Our day ended on the bank of the Thames drinking prosecco from our first-place tankard prize and feeling quite pleased with ourselves – so finally a big well done to all of the girls this weekend, I was proud to be in that boat!

Back to LSERC Reports
GET IN TOUCH
CONTACT US